There is no slowing down for Nobel laureate Robert Shiller who was awarded the Gold Honor Medal and the 2017 Truman Medal for Economic Policy. He even had time in his busy schedule last November to present at the opening reception for Yale’s Center for Science and Social Science Information media wall exhibit called Economics Department at Yale: Understanding and Changing the World. Below is an article on Prof. Shiller receiving the Gold Honor Medal.

Robert J. Shiller, Sterling Professor of Economics at Yale, received the Gold Honor Medal from the National Institute of Social Sciences during an awards dinner held on 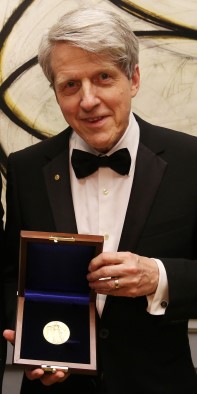 The medal has been presented annually since 1913 for distinguished service to humanity. Previous honorees, which include four U.S. presidents and 16 Nobel Prize winners, represent outstanding achievement in the social sciences, law, government, education, philanthropy, the arts, medicine, science, and industry.

At the awards dinner, Paul Krugman — New York Times columnist and 2008 Nobel laureate in economics — described Shiller as “one of my great heroes,” noting “how beautiful, how elegant Bob’s work has been over the years.”

Shiller, a 2013 Nobel laureate in economics and co-creator of the Case-Shiller Index of U.S. house prices, is the author of Irrational Exuberance (now in its third edition); Subprime Solution: How the Global Financial Crisis Happened and What to Do about It; Animal Spirits: How Human Psychology Drives the Economy and Why It Matters for Global Capitalism (with George A. Akerlof); and Finance and the Good Society.

The event also honored Pulitzer Prize-winning biographer Ron Chernow and Michael I. Sovern, a president emeritus of Columbia University. A complete list of Gold Medal recipients is available at the National Institute’s website.