The Move to Yale 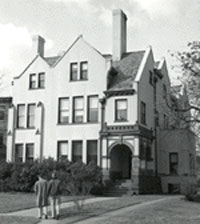 The commission, which will become a functional part of Yale’s Department of Economics, has attracted world-wide attention for the scholarly economic theories developed by its members since it was organized in 1932.

President A. Whitney Griswold, of Yale, said in his announcement today that when the move is completed the commission’s name will be changed to the Cowles Foundation for Research in Economics at Yale University.

In a commentary on its 20-year research report, Kenneth E. Boulding, Professor of Economics at the University of Michigan, wrote recently that “when the history of economic thought in the twentieth century comes to be written, the work of the members of the Cowles Commission will occupy a large part of the book.”

President Griswold also announced that James Tobin, Associate Professor of Economics at Yale, will become Director of Research for the Cowles Foundation for Research in Economics at Yale University. He emphasized. that the Foundation will continue its publication of research monographs in its new location here.

The Cowles Commission, which has spearheaded the movement to relate theories of economics to mathematical and statistical studies, was organized at Colorado Springs, Colorado in 1932 with ﬁnancial support from Alfred. Cowles, Yale Class or 1913, and other members of his family.

In 1939, when Mr. Cowles moved to Chicago, it was decided to move the headquarters or the commission there, partly because of the diﬀiculty in attracting topflight economists to a location so remote as Colorado. At the same time a relationship was established between the commission and the University of Chicago.

Lloyd G. Reynolds, Sterling Professor of Economics and Chairman of the Department of Economics at Yale, in commenting on this new move of the Cowles Commission to Yale, said that “in a sense, this very important center for the study of economics is returning home, since Mr. Cowles himself is a Yale alumnus.”

In addition to serving as Secretary of the Executive Committee, which will approve all plans, policies, budgetary matters and appointments of the Cowles Foundation, Mr. Guthrie will serve as Assistant Director of Research for the Foundation.

Headquarters of the 24-year-old Econometric Society, which publishes the quarterly journal, Econometrica, will accompany the Cowles Foundation to New Haven.

The Cowles Foundation for Research in Economics at Yale, together with the Econometric Society, will be housed in an old New Haven mansion, the Dana House at 30 Hillhouse Avenue, which is only a few steps away from the oﬀices of the Yale Economics Department.

Mr. Reynolds, explaining that the Cowles Foundation will give new impetus to the research activities of the Yale Economics Department, said that many advantages will accrue to the University from the new arrangement:

It will bring to Yale many internationally-known economists, a number of whom will lecture and teach.

It will bring to Yale several excellent young economists who will contribute to the research now in progress in the University.

It will strengthen Yale’s graduate teaching program in all branches of economic theory, mathematical economics and statistics.

It will attract graduate students of high caliber to Yale. Thus, it will strengthen Yale’s Department of Economics on the graduate and undergraduate level.

In his review of the Cowles Commission’s 20-Year Research Report, published in 1952 under the title, “Economic Theory and Measurement,” Professor Boulding, of Michigan, writes:

“Occasionally there spring up in the academic community extraordinary centers of ideas and research of such life and vitality that their influence reaches out into the whole world of the intellect. Such, for instance, was the group of economists at the University of Vienna at the close of the last century, or the group at Cambridge University between the world wars.

“It is becoming more and more clear,” he continued, “that the Cowles Commission and the leaders of the Econometric Society constitute such a group in the present day, in the sense that no economist anywhere in the world can aﬀord to remain completely ignorant of the ferment of ideas, the new research techniques and new points of view which are constantly proceeding from the activities” of the Commission.

“Econometrics has been one of the most signiﬁcant ‘growing points’ of economics in the past 20 years,” he pointed out. “It is not however a ‘school’ in the sense of the ‘Austrian School’, contending for the supremacy of its theoretical position against other schools, so much as a ‘movement’, ﬁnding its bond of unity in the common skills and methods of its adherents rather than in any uniformity of theoretical position. The nerve center of this world movement is unquestionably the Cowles Commission,” he said.