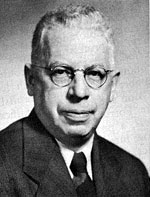 Harold T. Davis was associated with the Cowles Commission since its beginning, spending several months each year in the Commission’s laboratory while it was at Colorado Springs and serving as a consultant throughout the balance of the time. From February to August 1937, he was acting research director.

He was professor of mathematics at Indiana University, 1923–37, and at Northwestern University from 1937, becoming full professor and chairman of the Department of Mathematics in 1942. Davis was a Fellow of the Econometric Society. He was an associate editor of Econometrica, and served in the same capacity for Isis and the Bulletin of the American Mathematical Society.