William Nordhaus ’63 B.A., ’72 M.A., Sterling Professor of Economics, has been awarded a BBVA Foundation Frontiers of Knowledge Award for his pioneering research on the economics of climate change.

The annual awards recognize signiﬁcant contributions in the areas of scientiﬁc research and cultural creation. Nordhaus received the award in the climate change category. According to the award citation, Nordhaus founded the ﬁeld of climate-change economics by “pioneering a framework that integrates climate science, technology and economics to address the critical question: What should the world do to limit climate change?”

Since the 1970s, Nordhaus has developed economic approaches to global warming, including the construction of integrated economic and scientiﬁc models (the DICE and RICE models) to determine the eﬀicient path for coping with climate change. These models are widely used today in research on studies of climate-change economics and policies. 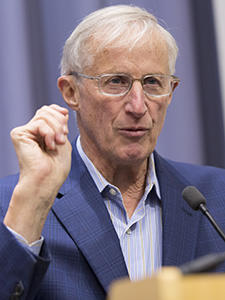 “Nordhaus used his models and economic insights to illuminate such considerations as the role of discounting future climate damages, the risk of catastrophic damages, and the role of technological change in the energy system,” the citation states. “Owing to the transparency and simplicity of his approach, his models are used worldwide to analyze climate policy options.”

From 1977 to 1979, Nordhaus was a member of the President’s Council of Economic Advisers. He has served on several committees of the National Academy of Sciences on topics including climate change, environmental accounting, risk, and the role of the tax system in climate change. He served as the chair of the Board of Directors of the Boston Federal Reserve Bank from 2014 to 2015.

Nordhaus has written many books, among them “Invention, Growth and Welfare, Is Growth Obsolete?” and “The Eﬀicient Use of Energy Resources.” He co-authored (with Paul Samuelson) the classic textbook, “Economics,” whose 19th edition was published in 2009. His book on economic modeling of climate change, “A Question of Balance,” was selected by Choice magazine as an Outstanding Academic Title of 2008. His most recent book, “The Climate Casino: Risk, Uncertainty, and Economics for a Warming World,” was published in 2013.

Editor’s note: Excerpts of this article were originally posted in the January 9, 2018 edition of the Yale News.