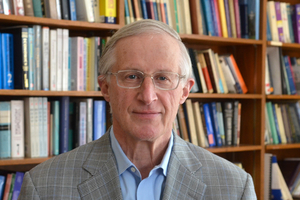 On October 8, 2020, in Washington, DC, the American Academy of Political and Social Science (AAPSS) will award the 2020 Daniel Patrick Moynihan Prize to Cowles Staﬀ Member, Sterling Professor of Economics, and Professor of Forestry and Environmental Studies, William Nordhaus. The Moynihan Prize is awarded annually to a leading policy-maker, social scientist, or public intellectual whose career demonstrates the value of using research and evidence to improve the human condition.

“I am most honored to receive the Moynihan Prize from the American Academy of Political and Social Science,” Nordhaus stated. “Pat Moynihan was the rarest of scholars, combining brilliant analysis, political engagement, and sheer bravery. He stands as a beacon in these dark times for those in the educational and public sphere who search for new truths while defending the best from the past.”

Nordhaus’s pioneering work has been foundational to worldwide eﬀorts to address climate change. He was the ﬁrst macroeconomist to take seriously the notion that climate can be influenced by human behavior and that human action and economic policy can influence climate. He has gone on to develop influential models that examine the consequences of climate policy interventions on the global economy. Since the 1970s, Nordhaus has argued that tax policy is the most eﬀective remedy to the pollution that causes global warming.

To assess the costs of climate change, Nordhaus developed an economic model in the mid-1990s that he called the Dynamic Integrated Climate-Economy model, or DICE—a name that he chose to allude to the idea that, in his words, “we are gambling with the future of our planet.” This model remains the industry standard, used by bodies around the world to understand options to address climate change.

Nordhaus was awarded the Nobel Prize in Economic Sciences in 2018. In making its award, the committee observed, “At its heart, economics deals with the management of scarce resources. … William Nordhaus’ ﬁndings deal with interactions between society, the economy and climate change,” noting that Nordhaus has “brought us considerably closer to answering the question of how we can achieve sustained and sustainable global economic growth.”

Nordhaus studied at Yale University as an undergraduate and completed his Ph.D. in Economics in 1967 at the Massachusetts Institute of Technology. He has been a professor at Yale University since 1973. He has been a member of the Brookings Panel on Economic Activity since 1972, and from 1977 to 1979 he was an economic advisor to President Jimmy Carter’s administration.

“Nobelist Bill Nordhaus is an easy choice for this year’s Moynihan Award,” said AAPSS President Kenneth Prewitt. “Moynihan was an early and powerful voice on issues that the nation’s leaders were not yet taking seriously. After decades of warnings from natural scientists, the country needed a social science voice alerting us that climate change was coming after our society and economy. Nordhaus has been that early and powerful voice, bringing the climate alarm from the science section to the front page.”

Previous Moynihan Prize recipients include John Holdren, former director of the White House Oﬀice of Science and Technology Policy; economist and Nobel laureate Joseph Stiglitz; sociologist William Julius Wilson; domestic policy analysts Isabell Sawhill and Ron Haskins of the Brookings Institution (who won the Prize jointly in 2016); and Samantha Power, former US Ambassador to the United Nations. A full list of Prize recipients can be found on the AAPSS website.

Nordhaus will give a public lecture on October 8, 2020, in Washington, DC, at the Willard Intercontinental at 4:00 p.m.


Source: The American Acadamy of Political and Social Science