To commemorate Tjalling Koopmans’ Nobel Medal, we take a look back at the October 15, 1975 New York Times article announcing the prize awarded to both Koopmans and Leonid Kantrovovich.

STOCKHOLM, Oct. 14 —Leonid V. Kantorovich of the Soviet Union and Tjalling C. Koopmans of Yale University were named by the Swedish Royal Academy of Science today as co‐winners of the 1975 Nobel Memorial Prize in Economic Science.

By The Associated Press.

They were cited “for their contributions to the theory of optimum allocation of resources.” The two men, who are to share a $143,000 prize, conducted broadly similar work, largely independent of one another, although with some contact over the last 20 years.

The Swedish academy said their work, embracing whole national economies as well as individual corporations and even divisions, had led to improved economic planning. On the practical side, their theories have been applied for such purposes as more eﬀicient transportation, how best to assign men to machines and improved warehousing and storage.

Professor Koopmans, a 65year‐old economics professor at Yale, who was born in the Netherlands, said he was “delighted” by the news. Professor Kantorovich, a 63‐year‐old mathematician and member of the Soviet Academy of Sciences, said in Moscow he was “very touched.” Each man praised the work of the other.

Dr. Kantorovich said he hoped to be able to travel to Stockholm to receive the award. But Swedish professors expressed concern that Dr. Kantorovich, although not an outspoken critic of the Soviet system, might he caught up in the wake of Kremlin anger over. last week’s award of the Nobel Peace Prize to Andrei D. Sakharov, the dissident. Soviet. Physicist and champion of human rights.

The Soviet press had no immediate comment on the economics award.

Mr. Sakharov was honored for his militant opposition to oﬀicial Soviet policy, and Soviet spokesman have condemned the award just as they did when the 1970 Nobel Prize for Literature was awarded to Aleksander Solzhenitsyn.

Dr. Kantorovich is an indirect critic of the Soviet economic system although his criticism is couched in mathematical language.

He has maintained that a deﬁcient Soviet investment policy has failed to achieve optimum economic growth and has estimated the optimum rate of economic growth at 12 per cent, concept quite contrary to oﬀicial Soviet economic policy.

“As they have formulated the problems and described the connection between production results and productive inputs in new ways, these two, scholars have been able to achieve highly signiﬁcant results,” the Swedish academy said.

“Early in his research. Professor Kantorovich applied the analytical technique of linear programing to demonstrate how economic planning in his country could be improved,” it noted.

“Professor Koopmans for his part, has shown for instance that on the basis of certain eﬀiciency criteria it is possible directly to make important deductions concerning optimum price systems,” the academy. added.

Dr. Kantorovich is the ﬁrst Soviet citizen to receive the economics prize, ﬁrst awarded in 1969. The prize was set up by the central Bank of Sweden as a memorial in addition to the ﬁve original Nobel prizes established by the will of Alfred Nobel, the inventor of dynamite. 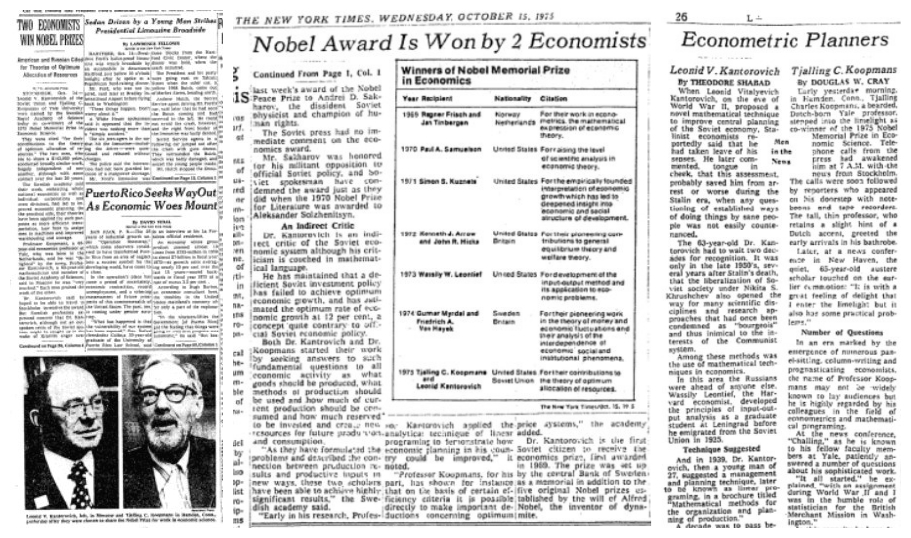