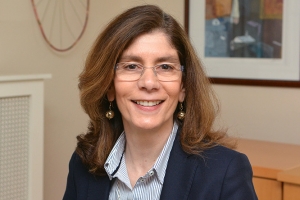 The American Economic Association (AEA) announced that Pinelopi (Penny) Koujianou Goldberg has been elected vice-president of the Executive Committee for the 2018 term.  Goldberg who is the William K. Lanman, Jr. Professor of Economics and a Cowles Foundation research staﬀ member, will co-chair the position with Susan C. Athey, The Economics of Technology Professor, Graduate School of Business, Stanford University.
The vice-president term is for one year beginning the last day of the next annual meeting in January, at which time Goldberg and Athey will assume their positions.
Goldberg has been a member of the AEA since 1992, and was the editor-in-chief for the AEA’s keystone journal, the American Economic Review, from 2011 to 2017. Currently, Goldberg is a co-editor for the journal.
Her teaching and research interests lie in the areas of applied microeconomics, empirical international trade, and industrial organization. Having published numerous articles, her current research interests include the eﬀects of trade liberalization on growth and the income distribution, the eﬀects of intellectual property rights enforcement in developing countries, and the determinants of incomplete exchange rate cost pass-through.
She earned a Diplom in Economics from University of Freiburg, Germany, and a Ph.D. in Economics from Stanford University. She has taught at Princeton University and Columbia University, and was a visiting scholar at the Federal Reserve Bank of New York.
Goldberg is a fellow of the American Academy of Arts and Sciences, and a recipient of the John Simon Guggenheim Memorial Foundation Fellowship and the Bodossaki Prize in Social Sciences. She is also an elected fellow of the Econometric Society and member of its executive committee, a research associate at the National Bureau of Economic Research (NBER), and a board member of the Bureau for Research and Economic Analysis of Development (BREAD).

Other elected seats to the 2018 AEA committee are President-elect, Ben Bernanke, former Chairman of the Federal Reserve Board; Executive Committee Members, Adriana Lleras-Muney, Professor, Department of Economics, UCLA, and Betsey Stevenson, Associate Professor of Economics and Public Policy, Gerald R. Ford School of Public Policy, University of Michigan.
Established in 1885, the AEA is a non-proﬁt, non-partisan, scholarly association dedicated to the discussion and publication of economics research. The AEA has over 20,000 members from academe, business, government, and consulting groups within diverse disciplines from multi-cultural backgrounds. All are professionals or graduate-level students dedicated to economics research and teaching.