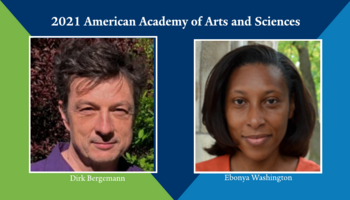 Professors Bergemann and Washington will join 250 other members elected into the 2021 class of the American Academy of Arts and Sciences for their leadership and research contribution in the ﬁeld of economics. Of note, 55% of the members elected this year are women.

Professor Washington specializes in public ﬁnance and political economy with research interests in the interplay of race, gender and political representation; the behavioral motivations and consequences of political participation and the processes through which low income Americans meet their ﬁnancial needs. Her work has appeared in the American Economic Review and the Quarterly Journal of Economics.

In announcing this year’s fellows, American Academy of Arts and Sciences President David W. Oxtoby said, “We are honoring the excellence of these individuals, celebrating what they have achieved so far, and imagining what they will continue to accomplish. The past year has been replete with evidence of how things can get worse; this is an opportunity to illuminate the importance of art, ideas, knowledge, and leadership that can make a better world.”

The American Academy of Arts and Sciences was founded in 1780 and is, “one of the country’s oldest learned societies and independent policy research centers, convening leaders from the academic, business, and government sectors to respond to the challenges facing—and opportunities available to—the nation and the world. Members contribute to Academy publications and studies of science, engineering, and technology policy; global security and international aﬀairs; the humanities, arts, and education; and American institutions and the public good.”

Visit the American Academy of Arts and Scicnes news release for the oﬀicial annoucement and list of all the 2021 elected members.