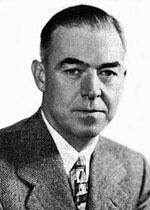 Theodore O. Yntema became director of research of the Cowles Commission at the time of the move to Chicago in September 1939. He joined the faculty of the University of Chicago in 1923 and was professor of statistics in the School of Business, 1930–44, and professor of business and economic policy, 1944–49.