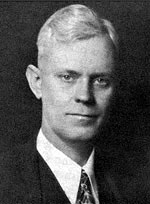 Charles F. Roos was director of research of the Cowles Commission from September 1934 to January 1937. He was National Research Council Fellow in mathematics 1926–28; assistant professor of mathematics at Cornell University, 1928–31; secretary of Section K (economics, sociology, and statistics), American Association for the Advancement of Science, 1928–31, and permanent secretary and member of the executive committee of that organization, 1931–33; fellow of the John Simon Guggenheim Memorial Foundation, 1933; director of research, National Recovery Administration, 1933–34; and professor of econometrics, Colorado College, 1934–37.