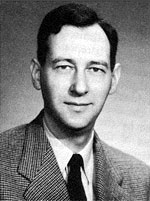 Tjalling C. Koopmans lectured at the Rotterdam School of Economics and served on the staﬀ of the Netherlands Economic Institute, 1936–37. From 1938 to 1940 he was engaged in business-cycle research at the League of Nations in Geneva.

In 1910–41 he was on the staﬀ of the Local and State Government Section of the School for Public and International Aﬀairs, Princeton University, and also taught statistics at New York University. In 1941–42, he was an economist with the Penn Mutual Life Insurance Company, and in 1942–44 he was a statistician to the Combined Shipping Adjustment Board at Washington.

He was elected a Fellow of the Econometric Society in 1940, of the Institute of Mathematical Statistics in 1941, of the American Statistical Association in 1949, and a member of the International Statistical Institute in 1951. He served as vice-president of the Econometric Society in 1949 and as president in 1950. He was a member of a committee of the Social Science Research Council on the Social Implications of Atomic Energy and Technological Change.

From August 1950 to January 1951, Koopmans visited leading European centers of research and instruction in econometrics and was appointed at that time correspondent member of the Royal Dutch Academy of Sciences in Amsterdam. He has had various articles published in the American Economic Review, Annals of Mathematical Statistics, Econometrica, Journal of the American Statistical Association, Journal of Political Economy, Proceedings of the International Statistical Conferences, and Review of Economics and Statistics.

He was editor of Statistical Inference in Dynamic Economic Models (Monograph 10), 1950, and Activity Analysis of Production and Allocation (Monograph 13), 1951; and co-editor of Studies in Econometric Method (Monograph 14) (forthcoming 1953). Two books by Koopmans, Linear Regression Analysis of Economic Time Series, 1937, and Tanker Freight Rates and Tankship Building, 1939, have been published.  [Abstracted from A Twenty Year Research Report 1932–1952.]