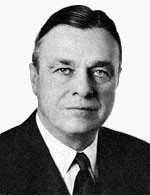 Mr. Cowles’s primary concern in 1932 was to elevate economics into a more precise science using mathematical and statistical techniques. From his own experience in investment counseling, he had been frustrated by the “guessing game” techniques used in forecasting the stock market and believed that scholarly research by experts could produce a better method. From that beginning, economists and mathematicians of the Cowles Foundation have been concerned with the formulation and application of quantitative techniques to economic analysis and forecasting, and the success of their work has necessitated a rewriting of virtually all economics textbooks.

The Cowles family has a long association with Yale University, starting with Alfred Cowles’s father and uncle who were Yale graduates. His grandnephew, William H. Cowles, 3rd [Yale University Class of 1953], President and Publisher of the Cowles Publishing Company of Spokane, Washington.

Some publications by Alfred Cowles: