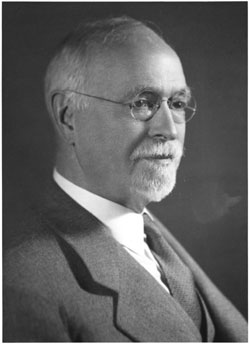 In this centennial year of the birth of Irving Fisher, it is appropriate to recall the various links between Fisher's thought and action as an economist and the origins and activities of the Cowles Commission (now Cowles Foundation) for Research in Economics.

The most important link is intellectual. It is the great influence of Irving Fisher's economic thought in the entire range of topics of research activity at the Cowles Foundation. As one example, the strong revival of capital theory of the last fifteen years builds directly on Fisher's fundamental and classic work, The Theory of Interest, and on other writings by him. Likewise, his work on index numbers and on distributed lags are landmarks in the development of econometric methods. The extent to which Irving Fisher's thought is alive in current economic research is illustrated by a forthcoming collective work, "Ten Economic Studies in the Tradition of Irving Fisher." One of these studies is an evaluation of Fisher's work by Paul A. Samuelson of the Massachusetts Institute of Technology. The other nine are all contributed by members of the Department of Economics of Yale University: Professors Fellner, Hall, Koopmans, Miller, Nerlove, Ruggles, Scarf, Tobin and Wallich. Of these, one is an account of Fisher as a scholar and individual. The other eight are contributions to the various fields of research in which Fisher was active. Four of the latter, written by members of the staff of the Cowles Foundation, are described below in the report on research activities.

The second link is historical. Fisher played an active role in the setting up of the Cowles Commission for Research in Economics, the predecessor of the Cowles Foundation. A full account of this history was given by Carl Christ in "Economic Theory and Measurement," A Twenty Year Research Report, 1932–52, of the Cowles Commission. Briefly, in 1931 and 1932, Fisher, Charles Roos, and Ragnar Frisch, in their capacities as President, Secretary, and leading European member, respectively, of the newly founded Econometric Society, discussed with Alfred Cowles his offer to set up and finance the Cowles Commission as a research organization in econometrics, to operate under the auspices and guidance of the Econometric Society, and recommended its acceptance to the Council of that Society. In this fusion of scholarly evaluation and enlightened financial sponsorship the Cowles Commission, later Foundation, found its origin.

The third link is that Fisher was associated with Yale University for most of his professional career, 1890–1935, first in the Department of Mathematics, then in the Department of Political and Social Science, and ultimately in the Department of Economics. Thus the Cowles Foundation is now contributing to the continuation at Yale of the approach to economic theory and measurement so brilliantly initiated and represented by Irving Fisher.