The 13th annual Conference on General Equilibrium and its Applications sponsored by the Cowles Foundation, was held on April 28-29, 2017. The two-day event hosted upward of 70 speakers and participants from the U.S. and abroad specializing in the study of general equilibrium (GE) economics.

The GE conference was founded in 2005 by John Geanakoplos, James Tobin Professor of Economics Ganakoplos, along with UPenn Professor, and former Yale Assistant Professor, David Cass. “We thought general equilibrium was a unifying theme for many diﬀerent ﬁelds of economics. We thought the most exciting work in economics was being done in macro and ﬁnance, but we wanted to take a more theoretical approach to these subjects,” said Geanakoplos when asked why the conference was started.

In its simplest deﬁnition, “general equilibrium means supply and demand among many diﬀerent markets at the same time and how they interact with each other,” said Geanakoplos who also serves as the conference lead organizer.

Having humble beginnings with 40-50 paper submissions its inaugural year, the conference has become a prestigious event in the area of GE. The number of submissions grew to nearly 130 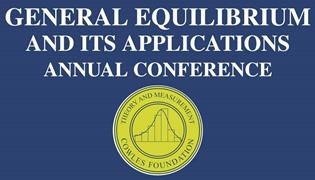 papers this year, with only 13 papers selected to present. While competition is quite stiﬀ, it is a testament to the interest the conference has gained over the years, something Geanakoplos is quite proud of. “It is becoming quite a big deal,” he said.

The study of general equilibrium is not new to Yale, with the Cowles Foundation, as it is steeped in tradition with many former members focusing their research in the area. Two of the greatest GE theorists were Kenneth Arrow and Gérard Debreu, both of whom were Cowles research staﬀ members and Nobel laureates. The two economists also ran a conference dedicated to GE in the 1960s and 70s.

Although the number of Yale faculty focusing on GE has decreased over the years with the recent retirement of Don Brown and the death of Hebert Scarf, classes on the subject are still taught by Geanakoplos and Truman Bewley, Alfred C. Cowles Professor of Economics. It is, however, the hope of Geanakoplos to rejuvenate faculty interest in GE, and the annual conference is one way to do so.

“General equilibrium theory has become one of the standard methodologies in macro economics and ﬁnance and international trade. It used to be regarded as the most theoretical of the economics ﬁelds,” said Geanakoplos. “Now it’s become so successful that it’s permeated many applied ﬁelds.”

This year’s complete schedule listing of times, talks, and presenters can be found on the 13th Annual GE conference page: https://cowles.yale.edu/conferences/general-equilibrium/2017