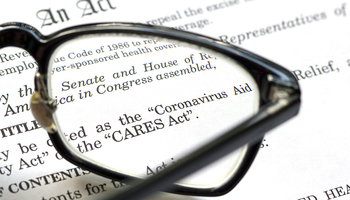 A new report by Yale economists and Cowles research staﬀ members ﬁnds no evidence that the enhanced jobless beneﬁts Congress authorized in March in response to the COVID-19 pandemic reduced employment.

The report addresses concerns that the more generous unemployment beneﬁts, which provide $600 per week above state unemployment insurance payments, would disincentivize work.

The researchers assessed this claim using weekly data from Homebase, a company that provides scheduling and timesheet software to small businesses throughout the United States. The ﬁndings suggest that, in the aggregate, the expanded beneﬁts neither encouraged layoﬀs during the pandemic’s onset nor deterred people from returning to work once businesses began reopening.

The enhanced unemployment beneﬁts were initiated under the CARES Act, a $2.2 trillion economic stimulus package enacted on March 27 that attempted to ease the pandemic’s severe economic consequences. The expanded beneﬁts, which are set to expire July 31, provide a $600 weekly payment in addition to any state unemployment insurance. The supplemental payment was designed to cover 100% of the average U.S. wage when combined with existing unemployment beneﬁts. The generosity of an individual’s unemployment beneﬁts depends on several factors, including their earnings history and their state’s schedule of beneﬁts.

The report found that workers receiving larger increases in unemployment beneﬁts experienced very similar gains in employment by early May relative to workers with less-generous beneﬁt increases. People with more generously expanded beneﬁts also resumed working at a similar or slightly quicker rate than others did, according to the report.

“The data do not show a relationship between beneﬁt generosity and employment paths after the CARES Act, which could be due to the collapse of labor demand during the COVID-19 crisis,” said Joseph Altonji, the Thomas DeWitt Cuyler Professor of Economics in the Faculty of Arts and Sciences, and a co-author of the report.

Critics argued that the expanded beneﬁts, which exceeded many people’s normal weekly wages, would incentivize businesses to lay oﬀ workers to cut costs and disincentivize recipients from returning to work. If the enhanced beneﬁts had these eﬀects, the researchers said, the data should show a signiﬁcant drop in employment in the week after the CARES Act took eﬀect; it should also show subsequent decreases in relative employment as workers with more generous unemployment beneﬁts put oﬀ returning to work. The data did not yield results that support these predictions.

The researchers found no evidence that recipients of more generous beneﬁts were less likely to return to work. They also found that workers who received larger increases in their unemployment beneﬁts relative to their wages did not experience greater declines in employment after the CARES Act was enacted.

The Homebase data primarily covers small businesses that require time clocks for day-to-day operations. The majority are restaurants, bars, or retail operations. The workers represented in the dataset are hourly employees who earn relatively low wages. While the data does not represent the entire U.S. labor market, it captures a segment of it that has been disproportionately aﬀected by the pandemic, the researchers noted.

The analysis controlled for the severity of the COVID-19 pandemic and for the various restrictions that states imposed on businesses during the public health crisis. The researchers tested their results against employment outcomes in the federal government’s Current Population Survey, a more representative sample of the labor market than the Homebase data, and obtained similar ﬁndings. But they stress that their results pertain to the current pandemic period of slack labor demand and do not speak directly to the eﬀects of unemployment beneﬁts on employment during normal times.

The analysis, supported by Yale’s Tobin Center for Economic Policy, comes as Congress debates whether to extend the expanded unemployment beneﬁts. The full report is available on the Tobin Center’s website.