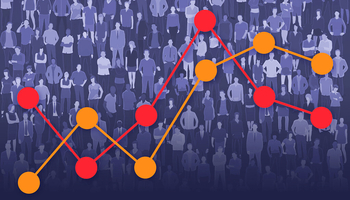 The COVID-19 pandemic’s devastating economic impact has intensiﬁed the need for timely and reliable economic data. A team of social scientists led by Nobel Prize-winning Yale economist William Nordhaus has pioneered a new approach to appraising the state of the U.S. labor market in real time.

The Yale Labor Survey (YLS) uses online panels of respondents to provide rapid and inexpensive information on employment, unemployment, and other labor-market measures. The YLS parallels the approach of the monthly Current Population Survey (CPS), the oﬀicial source of labor force statistics in the United States.

The methods and results of the YLS are described in a short report coauthored by Nordhaus, Sterling Professor of Economics at Yale University; Christopher Foote, a senior economist and policy adviser at the Federal Reserve Bank of Boston; and Douglas Rivers, professor of political science at Stanford University and chief scientist at YouGov — a global public-opinion company that conducted the survey.

The YLS found a high level of labor-market stress in April 2020 and then tracked a slow improvement in conditions from April to June. Looking at weekly numbers, the YLS found that the unemployment rate for the population aged 20 years old and over peaked at 19% at the end of April. It then declined to 17% in mid-May and to 15% in the middle of June.

The report also compares the YLS estimates with the oﬀicial government estimates. During the past three CPS surveys — which are conducted during the calendar week that includes the 19th of each month — the YLS estimated the unemployment rates of 18.0% for April, 17.2% for May, and 15.3% for June 2020 for the 20-plus population. The numbers for April and May were generally consistent with government ﬁgures on unemployment from the CPS, once the CPS data are adjusted for potential employment-classiﬁcation errors caused by the unique nature of the pandemic.

The YLS captured the employment changes in leisure and hospitality, the sector struck hardest by pandemic-related shutdowns. The YLS estimated that the unemployment rate in this sector peaked around 50% in April but declined to 33% in June.

The survey covers a period that began at the end of March and continued through the week of June 7-13. It is

based on 35,000 online interviews that ask about labor-market and related activities along with questions that determine the impact of the pandemic on patterns of work.

A key feature of the research is that it uses multiple user characteristics from the survey and user proﬁles of respondents, along with advanced statistical techniques and selection algorithms, to derive survey weights that make the online samples more representative of the U.S. population, said the researchers.

Online surveys have become increasingly popular, particularly in election polling, but they are not widely used to measure economic activity. A key advantage of online surveys, the researchers noted, is that they allow rapid turnaround (within a week) and are much less expensive than the more comprehensive government surveys, such as the CPS.

“Access to timely economic data is critical to addressing the unprecedented and rapidly unfolding impacts of the COVID-19 pandemic on our economy,” said Nordhaus. “Our work shows that online surveys like the YLS are feasible and could become valuable tools to help policymakers better understand and eﬀectively address the pandemic’s associated economic crisis.”

The study is one of several ongoing projects at Yale that collect real-time data to assess the pandemic’s economic eﬀects and inform policy. Yale’s Tobin Center for Economic Policy is supporting much of this work and provided research assistance to the YLS project.

“The COVID-19 crisis demonstrates how deeply the internet has penetrated our society,” Nordhaus said. “Millions of people rely on it to telecommute, buy groceries, and interact with loved ones. It seems likely that online surveys will become increasingly important in measuring many aspects of social and economic life. The YLS study shows the power of the internet and new social-science tools to produce accurate data quickly and inexpensively on important aspects of the society, in this case the labor market.”

The project was funded by Yale, the Tobin Center, and the Richard Lounsbery Foundation, a philanthropic organization that aims to enhance national strengths in science and technology.

The YLS report can be found on the Cowles Foudation website.