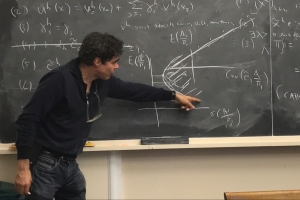 Cowles Staﬀ Member and James Tobin Professor of Economics, John Geanakoplos, is the 2019 recipient of the Lex Hixon ‘63 Prize which is awarded for teaching excellence in the social sciences by the Yale College Committee on Teaching and Learning. The prestegious award is one of ﬁve Yale College prizes awarded in recognition of distinguished undergraduate teaching.

Department Chair Dirk Bergemann said in an email, “I was very happy to hear this news, as John’s teaching over the years has influenced so many of us. I could not think of more worthy recipient.”

Geanakoplos received his B.A. in Mathematics from Yale University in 1975, his M.A. in Mathematics, and his Ph.D. in Economics from Harvard University in 1980. After graduating from Harvard, he began his career at Yale as an assistant professor. He was promted to an associate professor in 1983, professor in 1986, and the James Tobin Professor of Economics in 1994. From 1996-2005 he was director of the Cowles Foundation for Research in Economics.