FAS Honors Bewley and Phillips for Years of Service 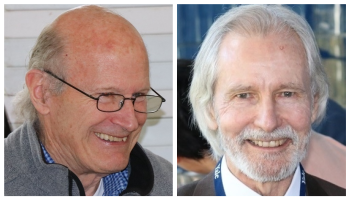 The FAS recently honored thirteen retiring faculty members for their long-time service to the university including Economics Professors Truman Bewley and Peter Phillips. Both Bewley and Phillips are acknowledged in the FAS Dean’s Retirement Tribute booklet. Below are excerpts from the booklet of the professors.

Truman Bewley, B.A. Cornell University, Ph.D. University of California at Berkeley, faculty member at Yale since 1983: You have had a remarkable career, in which you made long-lived contributions both to your discipline and to your department.
You began your career as a mathematical economist, making fundamental advances in the existence of economic equilibria and decision-making under uncertainty. In an extraordinary series of papers, you invented what have come to be known as “Bewley models,” now routinely taught as part of core curricula in graduate, and even undergraduate, economics. These models demonstrate how to construct economic equilibria with heterogeneous consumers facing earnings risk in the labor market. They now underlie much of the modern economic research on income and wealth inequality.
Most economists would have spent the rest of their careers building on this pioneering work because it has so many real world applications—and in fact many other economists influenced by you have indeed done so. You, however, are that rare academic who has truly followed the beat of his own drummer, courageously shifting gears in the middle of your career to study diﬀerent important economic questions.
That about-face led you to study a central and ancient question in macroeconomics—how wages change during recessions— using a methodology completely diﬀerent and radical, at least to economists: interviewing participants, both workers and employers, in the labor market. You undertook hundreds of such interviews over many years, which culminated in your influential book Why Wages Don’t Fall During a Recession. The book argues convincingly that the morale of the labor force is a critical factor in its success, one typically absent from standard economic models of recessions. In an ongoing years-long project, you are now using this same methodology to understand how prices in all kinds of markets are set, again interviewing hundreds of actual decision-makers.
At the same time that you have pursued pioneering research, you have earned an unparalleled record of running the department’s Ph.D. program—one of the world’s ﬁnest in no small part because of your wise and steadfast leadership. You have served as director of graduate studies for a remarkable quarter-century, ending your tenure only this year. During this time, through your quiet but ﬁrm leadership, the doctoral program in Economics at Yale has become one of the best in the world, attracting the most able students from all countries and routinely placing them at top positions in academia, government, and business. The hallmarks of the program are its high standards of excellence and its collegiality and fairness in training and nurturing students. Although we will deeply miss your unmatched wisdom in adapting to new challenges, the foundations you laid will allow the department to carry this venerable culture and tradition into the future.
The department of Economics considers you a gentleman and a scholar, Truman, irreplaceable, but with a legacy that will continue on and on.

Peter Phillips, B.A. University of Auckland, Ph.D. London School of Economics and Political Science, faculty member at Yale since 1979: You are one of the world’s most distinguished econometricians, known for your extraordinary clarity of mind and intellectual power.
Your research contributions span the ﬁeld of econometrics. A proliﬁc scholar with more than 250 publications, your theoretical work has elevated the quality of applied research in economics, ﬁnance, and more widely in the social sciences. Major ﬁelds have emerged from your work in such areas as stationary and nonstationary time series and panel data, unit roots and cointegration, spurious regression, and partially identiﬁed models.
Your contributions have been practical as well as theoretical: central banks use the powerful methods you have developed for detecting bubbles in asset prices in real-time. Your current research on random coeﬀicient models of panel data, machine learning, and econometric modeling of climate change, makes clear that your signiﬁcant contributions will not end with retirement.
Attracted to Yale in part by the devotion and love for their discipline of three legendary Yale economists—Koopmans, Orcutt, and Tobin—you have shown that you share that devotion and love and, like them, have become legendary in passing it on to others. To date over ninety Ph.D. students have beneﬁted from your superb mentorship, attentiveness, and collaborative instincts and are now prominent economists around the world.
Your influence is wide in journalism and in education: You are the founding editor of the Cambridge journal Econometric Theory and of the Cambridge advanced textbook series Themes in Modern Econometrics. A corresponding fellow of the British Academy, the recipient of honorary degrees and many awards, you also hold appointments in Singapore and at the University of Southampton. Although a worldwide traveler, you have now returned to your home country of New Zealand, where you have long held a visiting position at your alma mater, the University of Auckland, and where your family resides.
Brilliant economist and devoted Kiwi; your colleagues hope that, although you are far away, you retain warm feeling for your second home in New Haven, where you have made outstanding contributions and where we hope to see you again often.