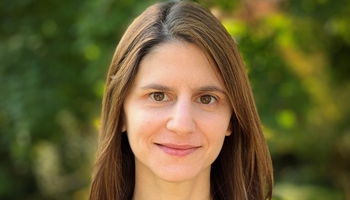 In 2016 — seven years out of graduate school — Halac won the Elaine Bennett Research Prize, awarded biennially by the American Economic Association to recognize outstanding work by a woman. This past summer, she was appointed the ﬁrst woman director of Yale’s Cowles Foundation for Research in Economics, one of the county’s most esteemed economic research institutes.

Previous Cowles Foundation directors include Nobel Prize-winning economists James Tobin and Tjalling Koopmans. Halac succeeds Larry Samuelson, the A. Douglas Melamed Professor of Economics, who had led the foundation since 2014.

Halac, professor of economics in Yale’s Faculty of Arts and Sciences, recently spoke to YaleNews about her work and vision for the Cowles Foundation. The interview has been lightly edited.

What are your research interests?

My research is in the areas of game theory, contract theory, and mechanism design. Much of my work tries to understand how people’s incentives are shaped by contracts and information, and how in turn one can design these to provide optimal incentives. My focus is theoretical but motivated by applied questions. For example, some applications I have studied include employment relationships between ﬁrms and workers, how to incentivize research and innovation, the design of ﬁscal rules to constrain public spending, and the problem of raising capital.

What are you currently working on?

I have new research with Elliot Lipnowski and Daniel Rappoport, economists at Columbia University and the University of Chicago, respectively, on team incentives. We study how ﬁrms optimally induce a team of workers to work towards a common project. A problem in this context is that, typically, workers can only be rewarded based on the overall project success, which relies on the contributions of each of the workers. As a result, a worker may not be willing to do his share unless he expects that others in the team will do theirs. An optimal incentive scheme must therefore manage workers’ expectations about each other. We show that this consideration has important implications for ﬁrms’ compensation practices, speciﬁcally for pay transparency and pay discrimination.

The three centers are highly complementary in our goal to encourage and support research in economics. The Tobin Center and the EGC emphasize empirical, data-driven approaches, with a focus on policy issues at Tobin and on lower-income economies at the EGC. The focus at Cowles is more theoretical, as is well captured by our motto “theory and measurement.” Cowles’ mission is to foster the development and application of rigorous logical, mathematical, and statistical methods of analysis in economics and related ﬁelds. There are important and exciting synergies between the three centers, both in the research that we conduct and in the programs that we oﬀer to support faculty and students.

What’s your vision for the Cowles Foundation?
Cowles is in great shape thanks to the exemplary leadership of my colleague Larry Samuelson. We are very active in supporting research activities, including sponsoring research visitors, postdocs, conferences, lectures, and other special initiatives. Moving forward, there are some new challenges as well as new opportunities. One relates to your previous question: How to best coordinate with other eﬀorts at Yale, especially now with the Tobin Center for Economic Policy. Another one concerns research centers, too, but at other institutions. While Cowles was pretty unique when it started, there are now similar centers in other schools. What makes Cowles special relative to them? We have the resources, the infrastructure, the expertise, the prestige. But we’ll have to be innovative to remain distinctive.

What initiatives or programs are you planning or thinking about?

The most immediate initiative is a new postdoc program that we put together for this coming job market season. Because of the current pandemic, many schools, including some of our main competitors, have hiring freezes in place. This creates an opportunity for us to go and hire top Ph.D. candidates who would be hard to attract in other years. Unfortunately, we also have hiring restrictions here at Yale due to the pandemic. In response we created three-year postdoctoral fellowships that we believe will be attractive to those top candidates. These fellowships will oﬀer new Ph.D.s an ideal environment to develop a strong research agenda alongside the faculty of the Cowles Foundation and the economics department.

You are the ﬁrst woman to lead the Cowles Foundation. What steps should be taken to increase diversity in the ﬁeld and provide more opportunities for women?

This is a question I have thought a lot about. I believe there are two sets of actions we should take. First, actions to help women in our profession who are ﬁnding too many obstacles in their path. Some of these obstacles have to do with the professional climate in economics; we have evidence that women, and other under-represented groups, are often treated unfairly and marginalized in our ﬁeld. It is simply impossible, and pointless, to increase diversity if we don’t create a welcoming and fair environment in which women can achieve professional satisfaction and success. But providing these opportunities for women is not enough. A second set of actions should be aimed at making female students aware of these opportunities and of the careers they can pursue in economics. I believe role models can be very powerful; for example, having women faculty speak to undergraduate students about their career paths can make a diﬀerence.

Economics has a long history at Yale, an eminent faculty, and wide popularity among students. What diﬀerentiates Yale economics from economics departments at peer institutions?

I would say mentoring, both of students and of junior colleagues. I haven’t seen a department where the faculty spend so much time and eﬀort at providing mentorship. And I love that about our department! Mentoring is so important in our profession. Sometimes it’s more diﬀicult for women and minorities to ﬁnd good mentors, which is another factor contributing to the lack of diversity in economics. It’s key that we invest in mentoring and that we pay special attention to under-represented groups. I personally beneﬁted a lot from having great mentors throughout my career, and in fact, I continue to do so.