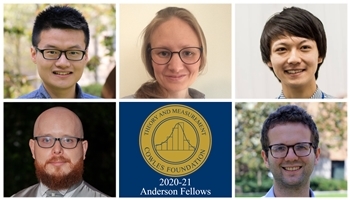 The fellowship prize is awarded annually to one or more pre-doctoral or post-doctoral students who are selected by a committee of Cowles professors in the Department of Economics with the approval of the Dean of the Graduate School. The cash prize also includes time oﬀ from academic duties for one semester, giving students time to concentrate on their research.

With the fellowship’s purpose to foster the advancement of economic research, the award was established in 1982 by the award’s namesake, Carl Arvid Anderson. Mr. Anderson created the award out of inspiration from a scholarship he received as an Yale undergraduate, to which he attributes in helping him earn a B.A. in Economics in 1936.

In Anderson’s own words, the fund is intended to “promote the development of more eﬀective methods of inquiry in economics and the dissemination of information resulting from such studies.” Since its foundation, over 130 recipients have been awarded the fellowship.